The Olsen family from Massachusetts were collected from their accommodation in Edinburgh on a lovely Scottish sunny morning, firstly driving out 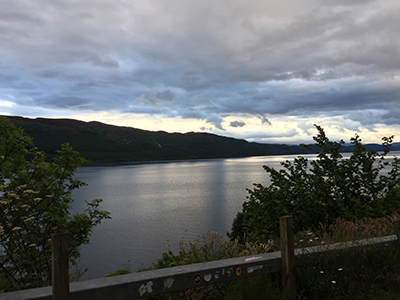 of the city over the Forth Road Bridge, the family enjoyed stunning views of this iconic structure. Graeme gave the family a detailed history on the bridges construction and maintenance before travelling through Perth for their first stop at Dunkeld, a picturesque ancient town in Perth and Kinross. The family visited Dunkeld Cathedral, built in 1260 then had a walking tour of the town. The tour drove through the village of Pitlochry and stopped off at The House of Bruar to see the magnificent waterfall, the Falls of Bruar and lunch. The tour then travelled on to The Highland Folk Museum (see attached video), where the popular Outlander series was filmed. The tour travelled on to Drumnadroicht on Loch Ness for their first overnight stay.

Second day of the Highland tour started with a walk from Drumnadroicht to the iconic Urquhart Castle, they family spent an hour exploring the ruined castle and admiring the views over Loch Ness. Next stop was the Loch Ness Visitors Centre where they found out all about the sightings of the elusive Loch Ness Monster over the years. The tour then travelled on to Inverness, the capital of The Highlands, with a stop off for lunch at The Castle restaurant, Inverness before heading to Culloden Battlefield. The group walked on the atmospheric battlefield with Graeme, who retold the events leading up to the last Jacobite uprising and last major battlefield on British soil. The tour then headed off a short distance to visit The Clava Cairns, ancient burial tombs and standing stones. 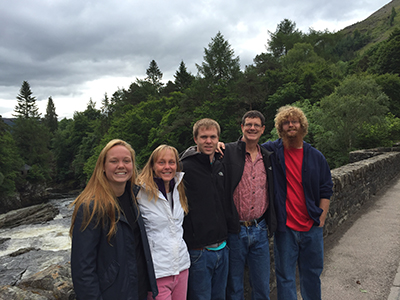 ng day Graeme collected the group at 9am to travel to Invermoriston Falls (see attached video) before heading to Fort Augustus where the group spent some time at The Loch gate system, Graeme explained how the loch system worked and raised the water level from Loch Ness to The Caledonian Canal. Onwards and upwards to Lochgarry Viewpoint, where you can see the view which resembles the map of Scotland. Afterwards the tour had a short drive to The Clunie Inn for some lunch before heading for Eilean Donan Castle, where they spent an hour exploring the castle, the group particularly liked the letter from Bonnie Prince Charlie sent to The Macleod Clan to ask for their support during the Jacobite Uprising of 1745. The tour then crossed the Skye Bridge and visited Kyleakin for a short walk round the harbour area, the final stop of the day was a fabulous viewpoint overlooking Loch Carron before the family were dropped off at their accommodation in Plockton.

Day 4 Graeme collected Hilary, Jeff, Sam, Tom and Ellie from Plockton Haven to travel over the sea to Isle of Skye, first visiting The Fairy Pools where Sam and Tom stripped off and jumped in (see attached video). Next destination after lunch in Uig was the Faerie Glen where everybody was brave and climbed on top of Castle Ewen then the group headed to the east side of the Isle of Skye to the fabulous Quiraing, luckily it was a clear day 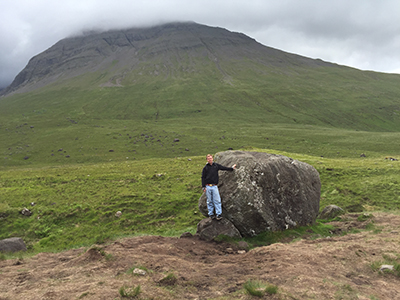 and they all loved the fantastic views over to the mainland. The tour continued on to the main town on the island, Portree, driving past The Old Man of Storr, arriving at Portree they accompanied Graeme for a walking tour of the town including the harbour where he pointed out the fishing fleet. Graeme, Sam and Tom then went to a local pub where Sam and Tom enjoyed a wee single Isle of Jura Malt. After a busy day on Isle of Skye they all returned to Plockton.

The following day the tour commenced by getting the ferry from Armadale, Isle of Skye to Mallaig on the mainland, on arrival at Mallaig the group had a short walking tour of the village then drove onwards to the Sands of Morar. The tour then travelled a beautiful scenic drive to the Glenfinnan Viaduct, they all climbed up behind the visitors centre to admire the outstanding views and marvel at the viaduct, made famous in the Harry Potter 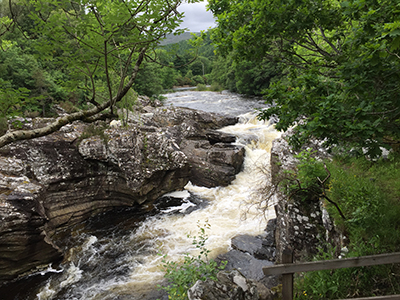 films. This vantage point also offers fabulous views of Bonnie Prince Charlie’s monument to commerorate the start of The Jacobite Uprising in 1745. Next stop was Inverlochy Castle for a short visit before stopping in nearby Fort William where they stopped at The Ben Nevis for lunch. After a lovely lunch the tour travelled on to Glencoe, stopping at The Three Sisters, three mountains halfway up the glen. The family then set off for a 40 minute hike up one of the mountains. On their return the tour followed the coastal route to Oban, passing Stalkers Castle, arriving at Oban for their overnight stay.

Last day of the tour, the group stopped at St Conan’s Kirk at Loch Awe, then visited Kilchurn Castle, which was a particular favourite of Jeff’s, perched on the banks of Loch Awe, this a hidden gem! The Falls of Falloch, a spectacular waterfall in the Loch Lomond  area, was the next stop off, Sam stripped off again and jumped 25 feet in to the pools below the Falls of Falloch. The tour then stopped off for some well deserved lunch at The Drovers Inn a 17th Century haunted inn. The group then travelled over to Kilmahog and had a close encounter with some Highland Coos who munched a full bag of carrots! A quick stop at Stirling Castle and Bannockburn for a walk on the battlefield then final stop of a fun filled and busy day was The Kelpies at Falkirk before they all said their tearful goodbyes to Graeme at Edinburgh Airport.